Donald Trump Jr has accused the Justice Department official who oversees investigations of voter fraud of being a member of the ‘Deep State’, after the official dramatically quit on Monday night.

Richard Pilger resigned after Attorney General William Barr authorized federal prosecutors across the U.S. to pursue ‘substantial allegations’ of voting irregularities before the 2020 presidential election is certified, despite little evidence of fraud.

Pilger, director of the Election Crimes Branch of the Department of Justice since 2010, stepped down within hours of Barr’s announcement, in an email he sent to colleagues that was obtained by The New York Times.

He wrote: ‘Wait. Seriously? Isn’t this the guy who was involved with the IRS and Lois Lerner in targeting conservatives and the Tea Party? Maybe that’s why he hasn’t done s**t at DOJ. #deepstate’ 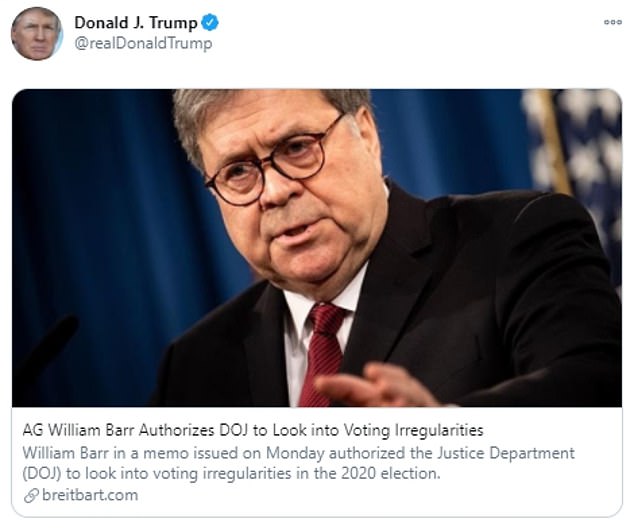 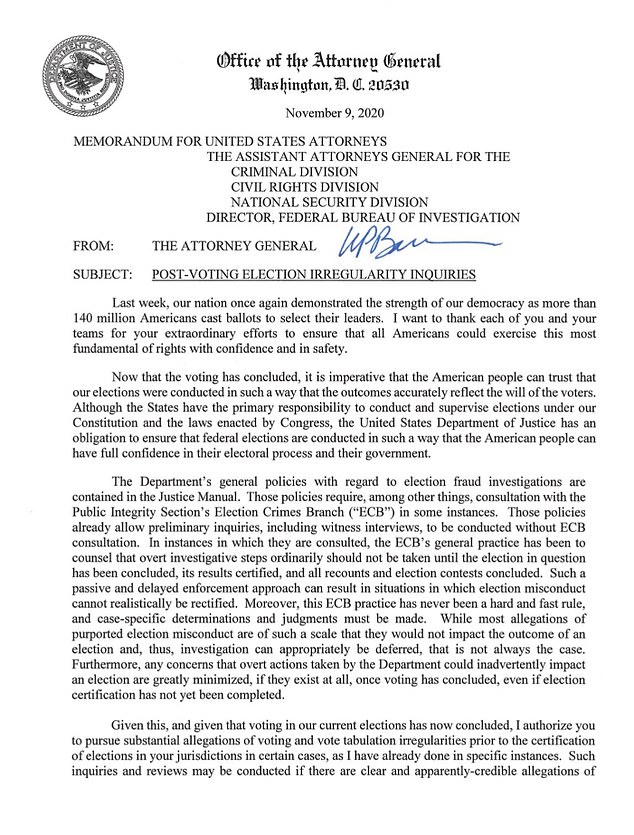 Starting in 2010, the IRS had begun targeting newly-registered tax-exempt groups for extra scrutiny following a Supreme Court ruling that allowed them to funnel money into politics.

It was later revealed that groups with ‘Tea Party’ and associated terms in their names were put on an IRS list that singled them out for extra scrutiny.

Lois Lerner, then head of the tax-exempt division at the IRS, had spoken with Richard Pilger over email in 2010, during his first year as head of the election crimes branch of the DoJ.

In the exchange – which came shortly before the midterm elections – they spoke about the possibility of prosecuting groups for abusing their tax-exempt status.

The pair also met around the same time, leading to claims that Republicans and conservative groups were being unfairly targeted by the Democrat establishment.

Their meeting was later scrutinized in Congress, amid an investigation that saw Lerner plead the Fifth to avoid incriminating herself.

Pilger submitted his resignation Monday evening shortly after his boss, Barr, announced the unprecedented federal support for the election investigations – a move which would delight Donald Trump.

In his resignation email, Pilger said Barr’s memo was ‘an important new policy abrogating the forty-year-old Non-Interference-Policy for ballot fraud investigations in the period prior to elections becoming certified and uncontested.’

He said his resignation was ‘in accord with the best tradition of the John C. Keeney Award for Exceptional Integrity and Professionalism (my most cherished Departmental recognition).’

Barr’s memo angered legal experts, who pointed out that any issues around voting are handled at the state level and should not be considered a federal matter.

Several analysts said that Barr was at serious risk of dragging the Department of Justice into a highly partisan electoral war, waged through the courts.

Pilger, whose 25-year career has been devoted to election crimes and public corruption, told his colleagues in the email on Monday evening that he was quitting, in a sign of how worried many within the legal community are at Barr’s unprecedented behavior.

Barr’s action comes days after Joe Biden defeated President Donald Trump and raises the prospect that Trump will use the Justice Department to try to challenge the outcome.

It gives prosecutors the ability to go around longstanding Justice Department policy that normally would prohibit such overt actions before the election is formally certified.

In his memo, Barr argues that the existing ‘passive and delayed enforcement approach’ could undermine the vote.

He says that the precedent should be ignored, and investigations conducted rigorously before the certification of votes on December 8.

‘In instances where they are consulted, the ECB’s (Election Crimes Branch) general practice has been to counsel that overt investigative steps ordinarily should not be taken until the election in question has been concluded, its results certified and all recounts and election contests concluded,’ he wrote.

‘Such a passive and delayed enforcement approach can result in situations in which election misconduct cannot realistically be rectified.’

A Justice Department official told the New York Times that Barr had authorized scrutiny of allegations about ineligible voters in Nevada and backdated mail-in ballots Pennsylvania.

Trump has not conceded the election and is instead claiming without evidence that there has been a widespread, multi-state conspiracy by Democrats to skew the vote tally in Biden’s favor.

Biden holds a sizable lead in multiple battleground states and there has been no indication of enough improperly counted or illegally cast votes that would shift the outcome.

Election officials from both political parties have publicly stated the election went well, though there have been minor issues that are typical in elections, including voting machines breaking and ballots that were miscast and lost.