Umm Al’aa will never tell her son who his father is.

He’s an ISIS fighter who raped her while she was a prisoner of the terror group. Now 40 years old, she was a mother and a grandmother before being kidnapped and held captive for a year and a half. She has a child who’s younger than her grandchild.
But he’s just as much a part of their family despite his grim beginning, she says.

‘You will be our slave’

Umm Al’aa is a pseudonym. To protect her, the woman is not being identified. Her neighbors in Mosul were ISIS supporters but she and her family refused to pledge allegiance to them.
The terror group has been in control of the city since 2014. ISIS fighters regularly came to their home to threaten them into submission. One day, they beat her daughter, tore off her headscarf and ripped her clothes. 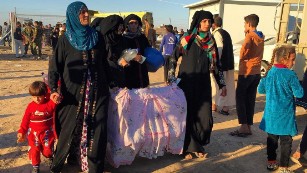 They wanted to rape her daughter, she said, but the man in charge did not let them.
“We want the mother,” she recalled him saying. 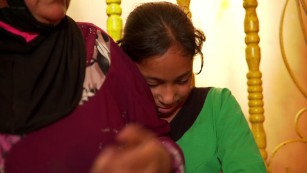 A few days later, they came for her when she was at the market. When they ordered her into a car she thought death was imminent but She was wrong.
“‘You will be our slave,'” she said, recalling their words.
For more than a year she lived as a prisoner, “like a dead person, but they had not killed me yet.”

Toward the end of her captivity one of her captors beat and raped her.
“I tried to fight, I cried a lot. There was a lot of pain, I was beaten a lot, but I couldn’t do anything,” she told CNN’s Arwa Damon.
By the time she was released she was pregnant with a son.
She named Mohammed after her husband, who was killed on Tuesday amid battles on Mosul’s eastern outskirts where Iraqi and coalition forces are battling ISIS fighters.
“My best memory of him was how much he loved and respected me,” she said. “Yes we are poor people, but we were happy.”
The boy may be a product of rape but he’s still her son. Their son.
“I am not going to tell him who his father is. That his dad is ISIS. He’s my son, he’s not ISIS’ son.”

McIlroy’s Return To Number One Is No Fluck