Hackers have targeted the website of Ghana’s electoral commission as votes are counted after tightly contested elections.

The commission says the website is up again, but it it is currently blank.

Wednesday’s election passed off peacefully, but voting was postponed to Thursday in one constituency after voting material failed to arrive on time.

A run-off will be held later in the month if neither of the two main candidates secures more than 50% of the votes.

“We deplore the attempt to hack the EC’s [electoral commission’s] website. Please respect the integrity and independence of the EC,” it said in a tweet. 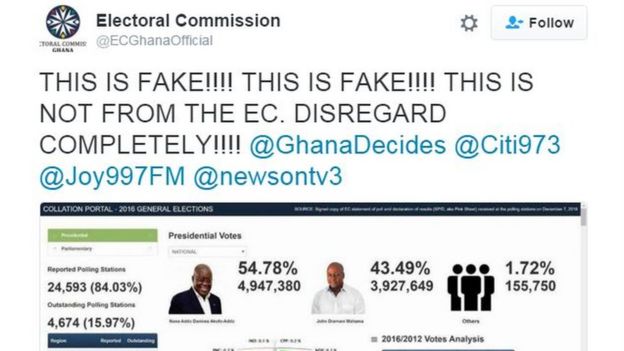 All seven candidates have pledged to keep the process peaceful but an opposition supporter died when a rally tuned violent on Monday.

Results are expected in the next two days

Voting in his northern home region of Bole on Wednesday, where he was mobbed by a cheering crowd, President Mahama said Ghana’s democracy had “matured” and this election would further consolidate it.

Asked about corruption, he told AFP news agency: “There is a general perception of corruption in all African countries. I think it is a stage of our development. As we continue to strengthen the institutions of state, I think that people will come to see the integrity in these institutions.”

Defeat for Mr Mahama of the National Democratic Congress (NDC) would make him the first incumbent to lose an election since Ghana returned to multi-party democracy.

He has been nicknamed “Mr Dumsor”, a local word that refers to the power cuts that have blighted the country during his term, but on the campaign trial has been trying to convince Ghanaians that he is delivering on his promise of creating more jobs.

Mr Akufo-Addo has promised free high-school education and more factories, but his critics have questioned the viability of his ambitions.

She is the first woman to run for president in the West African country.