All eyes will be on President Donald Trump and Russian President Vladimir Putin today when the two controversial world leaders meet for the first time.

The official bilateral meeting will bring Trump face-to-face with the leader of the country who United States intelligence says meddled in the 2016 election in an effort to get Trump elected.
READ: Why Trump wants a Russian ally
Over the past several days, Trump has been presented with a large binder of preparation materials for his trip to Europe but the section on his meeting with Putin amounts to only a “few pages” of paper, according to one White House official.
Another official said each talking point is only a sentence or two long to keep Trump focused during his meeting. 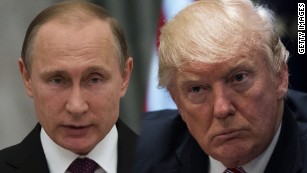 CNN reports that behind the scenes, advisers still express concern at Trump’s unpredictability ahead of the session with Putin, especially in light of Putin’s known practice of preparing extensively for his meetings with US leaders.
Everything from Trump’s body language with Putin to what he decides to say in the brief public portion of the encounter will be dissected the world over. Americans and Russians will watch their world leaders closely, but so will foreign powers who hope to glean information about how the new administration views Russia.
Here’s what to watch for:

It is generally the optics, not the substance, that defines a meeting such as this.
How will the two leaders present themselves? The body language and demeanor of the short public portion of Trump’s meeting with Putin will be analyzed, analyzed again and then over-analyzed for days and weeks. Will they be standing or sitting? Does Trump shake Putin’s hand? Does Trump use his height to lord over Putin? Or does Putin stay stoic and distant?
Trump has grown more aware of the optics that come with a bilateral meeting since his first visit with British Prime Minister Theresa May at the White House in January, where the president famously held May’s hand while walking. Months later, Trump failed to shake German Chancellor Angela Merkel’s hand during their meeting in the Oval Office, cementing the global view that their relationship was icy. 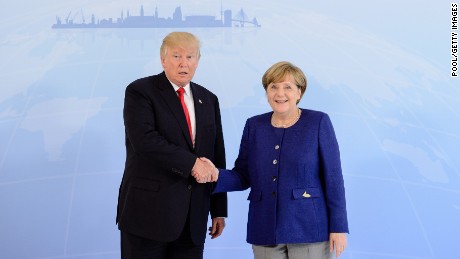 Trump was far chummier in May when he met with Russia’s Foreign Minister Sergei Lavrov and Ambassador to the US, Sergey Kislyak, at Putin’s request. Photos of the encounter showed Trump laughing, pointing to Kislyak and slapping Lavrov on the back. Later it came out that Trump revealed highly classified information during the meeting. But the optics of the encounter already cemented the public view of Trump’s relationship with Russia: friendly.

What do they talk about?

Cameras — not surprisingly — won’t be allowed for the entirety of Trump’s meeting with Putin, so the substance of what the two will discuss will be left to official readouts from each government and leaks from those in the room.
But the key question going into the meeting is whether Trump will bring up Russia’s election meddling.
Trump, administration officials tell CNN, plans to focus primarily on disputes in Syria and Ukraine when he meets with Putin on Friday. While a formal plan for the meeting has yet to emerge, there is little expectation on the American side that Trump will bring up Russia’s 2016 activities. 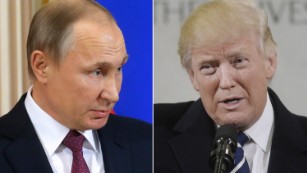 Will Trump bring up election meddling?
The President said Thursday that Russia could have been behind efforts to influence the election but suggested the finger can be pointed elsewhere as well and that “nobody really knows for sure.”
“I think it very well could be Russia but I think it could very well have been other countries,” Trump said during a news conference with Polish President Andrzej Duda. Russia has denied any involvement.
The Russians have looked to tamp down any suggestion that Trump and Putin will dive deeply into Russia’s incursions into Ukraine. Kremlin spokesman Dmitry Peskov told reporters on Wednesday that the meeting will “inevitably be limited in time” and therefore there will likely not be enough time for Putin to present “the full understanding” of the situation in Ukraine.

Is Trump-Putin an Obama-Putin redux?

Former President Barack Obama’s relationship with Putin was contentious.
“The personal relationship is very bad,” Matthew Rojansky, a director at The Wilson Center told NPR in 2013. “There’s no sugarcoating that, even though both have tried.”
The crescendo of their contentious relationship came in September 2016, when the two shared a visibly terse meeting on the sidelines of the G20 in Hanghzhou, China. Photos of the meeting showed a stern Obama staring down Putin.

Russian President Vladimir Putin meets with his US counterpart Barack Obama on the sidelines of the G20 Leaders Summit in Hangzhou on September 5.
Obama later revealed that he told Putin “to cut it out” in his meddling in the 2016 election or “there were going to be serious consequences if he did not.”
Not all presidents have viewed Putin with such skepticism, so a warm relationship with Trump would not be abnormal.
President George W. Bush said during a 2001 meeting with Putin that he was able to look him in the eye and “get a sense of his soul.”
“I looked the man in the eye. I found him to be very straightforward and trustworthy,” Bush said, standing next to Putin. “We had a very good dialogue. I was able to get a sense of his soul, a man deeply committed to his country and the best interests of his country. And I appreciated so very much the frank dialogue.”
He later added, “I wouldn’t have invited him to my ranch if I didn’t trust him.”

Trump has taken a hardline stance against North Korea since he took office in January, but the rogue regime has ratcheted up, not calmed down, its missile tests. Most recently the North Koreans tests what they claimed was an intercontinental ballistic missile on July 4.
So far, Trump’s ire with the Kim Jong Un-led country has been focused on China.
“Trade between China and North Korea grew almost 40% in the first quarter,” he tweeted hours before leaving for Poland. “So much for China working with us – but we had to give it a try!”

Trade between China and North Korea grew almost 40% in the first quarter. So much for China working with us – but we had to give it a try!

But Russia, like China, shares a border with North Korea and has so far defended the regime in the face of condemnation from the United States.
Lavrov warned Wednesday that Russia and China consider “unacceptable” any attempts to “justify a military solution” for the Korean peninsula by using the UN Security Council as an excuse.
“Any attempts of economic suffocation of the DPRK are also unacceptable,” Lavrov added.
With North Korea’s actions threatening to overshadow the G20 meeting, if Trump mentions North Korea in his meeting with Putin — and how he does so — may well prove key to future American actions on the regime.

How much does Trump’s visit to Poland impact his Putin meeting?

Trump gave a well-received speech Thursday in Poland, a country whose fear and distrust of Russia is fundamental to its existence and its membership in the North Atlantic Treaty Organization, which the country joined in 1999.
And he strongly backed Article 5, the principle that dictates an attack against one NATO country is an attack against all of NATO.
“To those who would criticize our tough stance, I would point out that the United States has demonstrated not merely with words but with its actions that we stand firmly behind Article 5, the mutual defense commitment,” Trump said.
Trump failed to mention Article 5 during his first trip to Brussels in May, causing some to question his commitment to the principle. The White House dismissed those questions, arguing Trump’s presence at an event honoring Article 5 and NATO’s role in responding to the September 11 terrorist attacks was enough clarity about the United States’ commitment to NATO collective defense.
Putin and Russia remain deeply skeptical of NATO. In June, Putin threatened to “eliminate” the “threat” of Sweden joining NATO.
“If Sweden joins NATO this will affect our relations in a negative way because we will consider that the infrastructure of the military bloc now approaches us from the Swedish side,” Putin told his state news agency. “We will interpret that as an additional threat for Russia and we will think about how to eliminate this threat.”